What’s In The Box?

Even at first glance, you’ll quickly realize that the AirVape Om isn’t your typical wax pen. It’s tiny and just about the same size as a middle finger.  You may start to wonder if such a small pen can deliver the goods. Well, you can find that out in our review after we took it through its paces.

What’s in the Package?

The pen and all its accessories are held securely inside the box by inserts. There’s a full ceramic atomizer with dual-quartz rod coils and its own stainless steel cap. A magnetic glass mouthpiece attaches to it. Aside from that, there are two caps for use with small and large universal cartridges.

Rounding up the list of goodies is a dabbing tool, a USB battery charger, and user’s manual. It comes with a limited lifetime warranty. 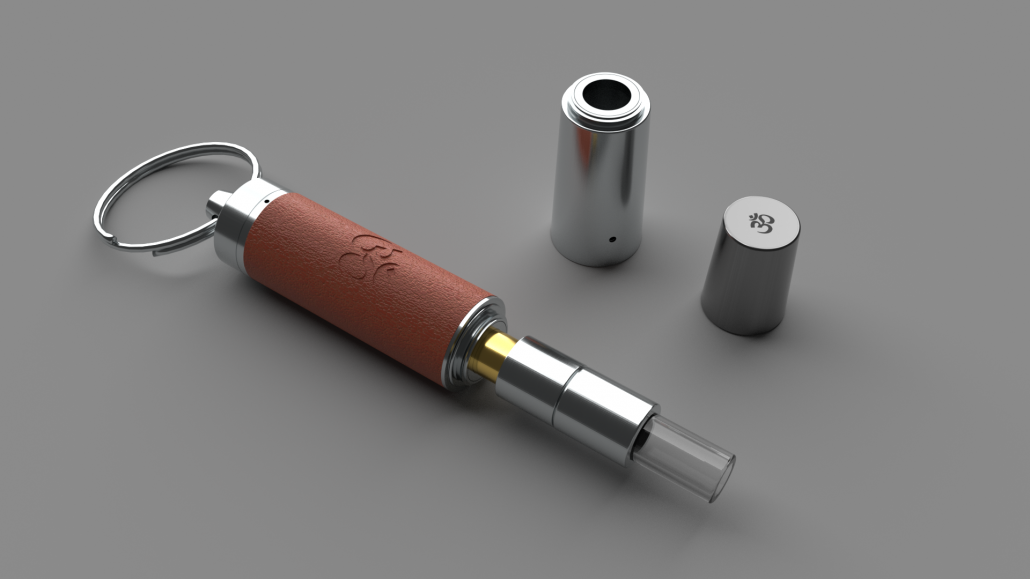 To further emphasize its portability, the Om even sports a keyring that swings freely on one end, although that does extend its length to 4.5 inches. Circled around the keyring’s base is a thin LED indicator light that changes color depending on what function or setting you used.  Located at the top of this base is a click pen type button for operating the wax pen.

The caps and structure are made of stainless steel for durability, while the base of the pen has a dark faux woodgrain finish. The overall design is robust and compact, yet stylish and elegant, giving it a high-end appeal.

The keyring is obviously meant to hold your keys so you can slip them discretely into any sized pocket. However, we don’t recommend doing that because leaving your keys dangling under it while you’re vaping doesn’t seem to be a good idea.  What would’ve been more practical is some sort of clip-on mechanism that would allow you to detach it quickly from the ring.

Since the Om is 510 threaded, it has the versatility to swap any small or large universal cartridge prefilled with either THC or CBD. You can also attach the full ceramic atomizer with dual-quartz rod coils if you prefer to load it with wax instead. We particularly liked the glass mouthpiece that attaches with magnets and makes loading the atomizer easy.

All these attachments pair with corresponding stainless steel caps for protection and to further secure them into place. A single 350mah rechargeable battery powers the whole thing.

Five clicks of the button turn the pen on or off, and an LED indicator light will flash to confirm the action.

Double-clicking will cycle through the three preset voltage settings. The LED also flashes and changes color depending on what setting it’s in.  It turns white at the lowest setting of 2.4v, blue at medium with 3.2v, and red at the highest with 4.0v.

Operating it is straightforward enough. However, we think the placement of the button is a little awkward.  More often than not, you’ll be clicking it from the bottom while you’re vaping. It would’ve been more comfortable to use if the button was on the side of the pen.

To use it with wax, first, you have to screw in the atomizer if it isn’t already, and detach the glass mouthpiece to expose the rods. Next, you dab the rods with a small amount of wax and snap the mouthpiece back into place. Secure the atomizer with its cap. To begin vaping, set it to the voltage that you want, then hold down the button while you’re drawing from the mouthpiece.

With the cartridges, it’s even easier.  All you have to do is to remove whatever is attached and then replace it with the cartridge that you’ll use.  Secure it with its corresponding cap, and you’re good to go.

It’s important not to leave the cartridges attached when putting the pen aside or storing it.

Since it can’t stand on its keyring, there’s a likelihood that any unconsumed material will collect on the mouthpiece. You can also keep the pen upright by putting it in a cup.

To recharge the battery, simply remove any attachment and its cap, screw in the charger, and plug it into a USB port.

As far as its performance with wax goes, we found that the middle voltage setting at 3.2v produces the optimal blend of hit and flavor. The lowest setting is practically useless since it doesn’t give a better quality output than the higher ones. Those who prefer thicker clouds and harsher hits can set it to the max 4.0v setting. The vapors are of good quality, especially considering how minuscule the pen is.

However, the problem with a pen this size is that you can only dab a small amount of wax. The tiny 350mAh battery makes it worse. For casual dabbers, it may be enough.  Although the vapors are tasty, heavier users will want to look elsewhere to satisfy their needs. It’s either that or to keep on recharging and loading the pen, which is rather pointless.

As can be expected with the cartridges, the output is pretty much dependent on their quality since the pen only supplies the power. We did find that the OM was able to vaporize cartridges with leftover material that other pens couldn’t finish.  Also here, the battery was sufficient enough to handle daily prefilled concentrates use. In that sense, this pen would be an excellent choice for cartridges.

We think that for this wax pen, a significant battery upgrade and a coilless heating solution would do wonders for its performance. If there’s a way to increase the loading capacity, that would be a plus too.

Despite its weaknesses, the vapor quality is surprisingly enjoyable for its size.  For those who prefer using prefilled cartridges, and only do some dabbing on the side, the AirVape Om would be a perfect choice.

However, if it’s the other way around, it might not work as well as you would like it to.

MARY NEGOTIATES FOR YOU

Tell us your favorite vape you want to get and we will negotiate the best price for you.